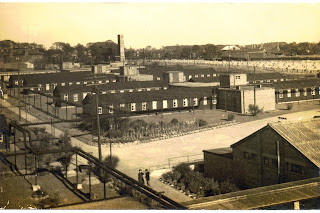 Kirkby is located located 10 miles north-east of Liverpool, in the metropolitan Borough of Knowsley and Merseyside County.
It was founded in circa 870 AD, settled from 1086 AD with a early population of 70 people, headed by Molyneux family. From the 16th century, the land where the college stood was fields which formed part of the lands of the Molyneux family (subsequently created the Earl of Sefton in 1771).

Royal Ordinance Factory (ROF Kirkby), a Ministry of Supply’s ammunitions factory, was built before the war in 1939 and completed in 1941. At its peak the factory employed 20,000 workers.

Kirkby Fields Hostel was built nearby to accommodate around 1,000 workers from the factory. The hostel also opened its doors to all to help alleviate the housing shortage during the war. The workers hostel occupied the same grounds of the Kirkby College.

In 1963 the easternmost part of the site was conveyed by the Minister of Aviation to the Urban District Council of Kirkby. In 1979, the remainder of the site (approx 25 acres) was then sold by The Secretary of State for Defence to Knowsley Borough Council for £15,000.

In the mid 1990’s, the land holdings were split across three new titles, presumably to accord with the different housing developers. The south western part of the land was developed by Redrow Homes (Lancashire) Limited, the eastern part by McLean Homes North West & Cheshire Limited and the northern part by Rivermead Homes Limited

The ground where the MTTC once stood is now a residential area and populated by houses.

Posted by KIRKBY COLLEGE ALUMNI SOCIETY at 6:17 AM

Re photo of Tunku at Kirkby, the reference to Tungku Yusoff in tyhe picture is not correct as this is a group of 1955 - 1957 . Tunku Yusoff was in the 1956/1958 batch and we arrived after Tunku Abdul Rahman had visited Kirkby.