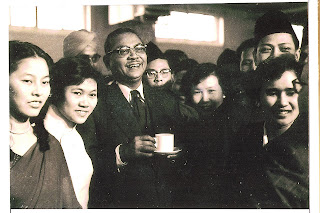 The Chief Minister of the Federation of Malaya, Tunku Abdul Rahman Putra today made the historic announcement that his country would be fully independent on 31st August 1957.

Addressing about 300 Malayan students, lecturers and certain high ranking officials at the Malayan Teachers’ Training College in Kirkby near Liverpool, the Tunku said, “For the next few months, the new greeting at meetings in our country will be ‘Merdeka!’. ”

“I can now make the disclosure that I have just returned form the Constitutional Talks with the Government of Her Majesty. The talks went off very well indeed – so well, in fact, what we had set our minds to get, we got. Other matters which we discussed have been settled amicably. The talks began in an atmosphere of friendliness and cordiality and ended on that very happy note yesterday afternoon.”

A beaming Tunku then announced, for the first time to the world, that the country’s independence or Merdeka would be on 31st August 1957. The jubilant students, standing up immediately, began clapping and enthusiastically shouting, “Merdeka! Merdeka! Merdeka!” amidst a battery of flashing cameras and whirring cine film gadgets of all sizes.

When the clapping and shouts of joy had somewhat subsided, the Tunku, smiling broadly, told the students, “I knew you would be happy to hear it.”

“We had reached London determined to obtain self-government and independence, and had been prepared to quarrel about it. But, after the talks had gone on for no more than a day, we found that we had won over Her Majesty’s Government to our side,” added the Tunku.

When the intermittent clapping and cries of jubilance had stopped, the Tunku continued, “Important tasks still lie ahead. Our independence is won. We must retain it all costs. We had worked hard to get it. We must work very much harder to retain it. We have enemies all around us. There are also enemies within.”

On a historic note, the Tunku told the audience that a remarkable coincidence had recently been brought to his attention by an article in a Malayan Magazine. He said, “It was one hundred and seventy years ago that the first Treaty had been signed between Malaya and England, between one of my own ancestors, the King or Sultan of Kedah, and Captain Francis Light, to cede off Penang Island. That was in 1786. It is now 1956. I have just concluded negotiations that would result in the return not only of Penang but of the whole country.” This resulted in another salvo of clapping and shouts of “Merdeka!”

The students and staff had been told on advance of the impending visit of the Tunku and his party which included Education Minister Dato’ Abdul Razak, but one had the slightest inclination that the Tunku would make such a historic announcement at the Kirkby College, even before leaving for Malaya which was waiting eagerly for his return.

As part of the preparation to welcome the high ranking visitors, the Kirkbyites (as the students call themselves) and the staff of the College had taken great pains to decorate the compound and the Main Assembly Hall. Palm trees and potted flower plants lined the entrance. Flags and buntings adorned the Hall. And all the students had put on their best multi-coloured national dresses – sarong, kebayas, saris, Punjabi costumes and cheongsams. Many were in their freshly ironed three piece lounge suits and smart College blazers, with the colourful crest sewn on it.

Waiting to welcome the visitors were Sir Dr. James Mountford, the Vice-Chancellor of the University of Liverpool, who was the Chairman of the Board of Governors of the College and other members of the Board, the Principal Mr. G.J Gurney and his staff and members of the Students Council.

As soon as the visitors and everyone had taken their seats in the Hall, the students with a thunderous united voice sang the College song, “The Golden Chersonese.”

One of the highlights of the historic occasion was a special speech by Dato’ Abdul Razak, who outlined the history of the development of education in Malaya and how it had progressed over the years. The setting up of the Kirkby College itself was part and parcel of the rapid progress of education in the country, he explained.

The students and other guests were then shown a film of the historic meeting of the Tunku with Chin Peng, the general-secretary of the Communist Party of Malaya, a clandestine terrorist organization.

By a sheer coincidence, among the audience during Tunku’s visit was a student, Tunku Abdul Aziz bin Tunku Ibrahim (1954 – 56), a Student Councilor and the Editor of the College Magazine, The Panduan. His father, Tunku Ibrahim was the OCPD of Police Headquarters in Jitra, North Kedah, who had accompanied the Tunku to the Baling Talks with Communist Party of Malaya headed by Chin Peng. Tunku Abdul Aziz was the founder of Transparency International and now one of the Vice President of DAP.
Posted by KIRKBY COLLEGE ALUMNI SOCIETY at 6:21 AM