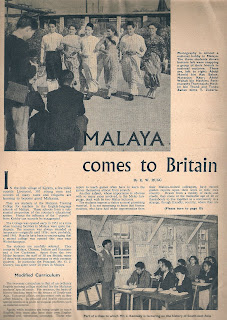 THE PIONEERS ARRIVED AT KIRKBY
BY: ABDUL RAHIM YUSOFF AND E.S VYTHESWARAN, 1952 - 52


When told by the English “escort” who had been accompanying us from Tilbury Port, London, (they turned out to be our future lecturers) that our final destination was just a few minutes away from the Kirkby Railway Station, we suddenly found new vigour to put extra “oomph” in our strides and couldn’t wait to see what our home for almost two years would be like. We had great and high expectations. After all, this was England, the nation that had once ruled vast portions of the Earth. It was Great Britain, architect of magnificent buildings and planners of mighty cities.

A brisk walk took us to the college campus. What confronted us was a cluster of dismal-looking black, longish single-storied blocks. Was this our campus? Shock and horror! And as though that was not depressing enough, long, zigzagging, fat, black pipes threateningly loomed high above our heads, as we trod and slipped and slipped and trod and made our way in the college “campus”, our home-to-be. Neither gardens nor greenery did we see anywhere. Compounded by the biting and howling wintry wind and the dark and damp evening sky, the scenery that frowned upon us completely shattered our dream.

Contrary to the mirth and laughter on board the ship and elsewhere, surprisingly, almost every one of us was silent, absorbed in his or her own thought. But, later during dinner we somewhat regained our traditional Malayan spirit and composure when we were served hot rice and crab curry. Yes! Hot crab curry similar to that back home! We learnt later that a local major shipping company, the Blue Funnel Shipping Line, which had close-connections with Malaya, had seconded five of their cooks who knew a thing or two about Asian cooking.

I was not sure whether it was the depressing cold, the sudden home-sickness, the tiredness, the first-day blues or the crab curry, which made me sleepy. But no sooner had I slipped into my comfortable single bed (which was made up like a sleeping bag) in my very own heated room (thanks, as we learnt later, due to the fat, ugly overhead pipes), when I fell asleep, “sleep, beloved from pole to pole, slip into my soul!”

The next few days were Majlis Suai Kenal (Orientation Week), so to speak. Upon entering the Hall, we were surprised to read “Selamat Datang Ke Kampong Kirkby” pasted on the backdrop of the stage. We were officially introduced to all lecturers, getting to know the lecturers personally, getting to know the various locations of the lecture rooms, the Library, the “Quiet Room”, the Assembly Hall, the Sick Bay, the Recreation Hall, the Dining Hall, and the Principal’s Office and the administration staff. We also familiarised ourselves with sporting facilities such as the indoor and outdoor courts and the “Padang” (playing field) below which a thousand rabbits had burrowed their homes.

Despite our earlier shock at the sight of the College, after a while we became very fond of the campus and equally fond of all the people helping to run the college. The cleaning maids, the kitchen helpers, the gardeners, the bus drivers, the office staff, all became part of our family. Kirkby was our home away from home. All the students were Malayan and we became a united community and turned our college into a little Malaya. It became our beloved “Kampong Kirkby” (Kirkby Village).

And on the 7th January 1952, the pioneer students of the Malayan Teachers’ Training College, Kirkby, assembled in the Assembly Hall and were formally welcomed by the Board of Governors of the College, headed by Sir J.F Mountford, Vice-Chancellor of the University or Liverpool. Nine months later, the second groups of students arrived, making the total enrolment of 300 teacher trainees. Ten months later, on 17th November, 1952, the Malayan Teachers Training College, Kirkby, fondly referred to as The Kirkby College, was officially opened by the Right Honourable Mr. Oliver Lyttelton, Secretary of State for the British Colonies.

The subjects we had to learn were rather exacting and varied. Principles of Education, Child Psychology, Health Education, English, Malay Language and so on. And we could choose an optional subject too such as maths, science, music, woodwork, physical education or art and craft.

A much-talked about activity was a project undertaken by the students from the Woodwork Department. With advice from some staff and one or two dockyard workers, the students showed their skill by building a boat or sampan. They named it ‘The Harimau’ (Malayan Tiger). The whole college was excited when the Principal, Mr. Robert Williams and his wife were invited to launch it and row it along the Liverpool Canal. We watched breathlessly, it didn’t sink! We gave a thunderous applause. For the first time, we saw our strict Vice-Principal, Mr. G.J Gurney actually laughing loudly and clapping. It was a great day.

In Kampong Kirkby, we students organized many interesting social activities, including folk and social dances. We presented stage performance called Malayan Medley to display our multi-cultural talents by performing Malay, Chinese, Indian and Portuguese dances and wide variety of songs in several languages. Every year the College staged several successful Malayan Plays and the locals were invited to see the play performed in the Hall. Through these cultural performances the name “Kampong Kirkby” spread throughout Merseyside and we received invitation from various organizations in Liverpool to perform cultural dances.

We organized special celebrations during Hari Raya, Chinese New Year, Deepavali and Christmas. In order to share the festival and joy, we invited not only our lecturers but also many friends around Kirkby and Liverpool.

Although we were in Kirkby for just about two years, we were exposed to an all-round life-long educational experience. It was an exciting and practical down-to-earth exposure. Beside academic subjects and intensive professional training to become teachers, we also learnt the importance of cultivating a humanistic and caring society, and the importance of living together in a tolerant and united close-knit community. One had to experience it to really know what it meant for a group of young Malayans to be housed in one campus for two years to be trained as teachers in the foreign land almost 8,000 miles from Malaya.
Posted by KIRKBY COLLEGE ALUMNI SOCIETY at 7:19 AM